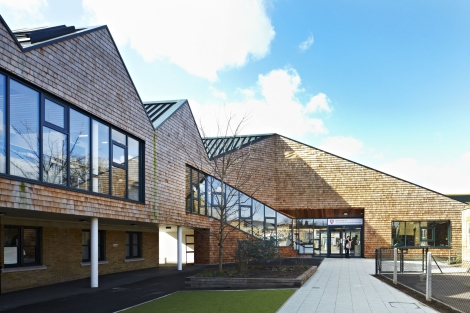 The widely-acclaimed Pegasus Academy at Whitehorse Manor in Surrey, which was designed by Hayhurst & Co and features a series of architectural aluminium glazing systems from Technal, has won another award for architecture and design.

The two-phase project, which has remodelled and expanded Whitehorse Manor Junior and Infant Schools to create an inspiring academy, has now been recognised with a Civic Trust Award 2015. This follows an RIBA Award (London category), the Schools Award in the AJ Retrofit Awards, Best Public Sector Interior at the FX International Interior Design Awards, and the scheme was shortlisted in the New London Awards.

The school's innovative design brings together a fragmented site with a series of extensions that thread new teaching spaces through a complex fabric of early 20th century buildings. The expansion includes a new nursery, six new classrooms, an enlarged hall, and a new entrance and administrative areas that link the two existing buildings.

Technal's faēade systems were specified for both phases of the project and used throughout.

GEODE-MX Visible Grid curtain walling features on all elevations, including the roof glazing above the new entrance and with Technal's casement window inserts for natural ventilation in both tilt/turn and top hung configurations.

Fixed light windows were installed in varying sizes into the building's striking gold shingle cladding and into the nursery's distinctive pitched roof which echoes the Victorian dormer windows to the infant hall. Ribbon glazing created from the same aluminium window system wraps around the nursery, set into curtain walling, to fill the rooms with natural light.

Sloped glazing was constructed from the GEODE-MX system for the stairways and involved complex detailing to the corner edges to meet the project's stringent design requirements. Technal also supplied casement door systems in manual and automatic configurations, for the main entrance installed into curtain walling and to provide access to the courtyard, nursery and the play deck for the nursery at first floor level.

Commenting on the project, Nick Hayhurst, Director at architects Hayhurst & Co, said, "This was a complex faēade project with some challenging geometry, such as angled ribbon glazing and long areas of continuous glazing at ground and first floor levels."

"We had previously specified Technal's products for our award-winning Hayes Primary School project in Croydon and were really pleased with the result. This meant we had no hesitation in specifying their systems again for both phases of the Pegasus Academy scheme. We used a combination of floor-to-ceiling glazing and individual windows to bridge the ground and first floors. We are very happy with the finished building which has received national acclaim and would definitely use Technal again for future projects."

All Technal's faēade systems were fabricated and installed by Everglade Windows and were finished in a dark green polyester powder coating with clear toughened glass units.

Technal has recently launched its most innovative casement window system to date, which has a host of technical advancements. The SOLEAL window has exceptional security, thermal, acoustic and weather performance, and unparalleled aesthetics from one single system that is available in numerous configurations. The new system uses a 65mm deep profile and common components to give architects and contractors the benefit of an extensive choice of construction options combined with ease of specification and maximum efficiency in manufacturing.

The SOLEAL window can be specified in two distinctive casement styles – a stylish 'visible' opening frame with an infill up to 52mm for a contemporary finish, or a patented 'minimalist' opening frame with slim, subtle sight lines that reduce the visible aluminium and a glazing infill of up to 42mm. Applications include education and healthcare buildings, apartments, office schemes, retail developments, sports centres, and custodial facilities.